The prosecutor asked the court to postpone the sentencing of Konstantin Ignatov, who, according to preliminary data, faces about 90 years in prison for financial fraud and grand theft.

Request for postponement of the hearing

On Wednesday, July 8, the U.S. District Court was supposed to make a final verdict to one of the key defendants in the OneCoin crypto pyramid case - Konstantin Ignatov. But the prosecutor Audrey Strauss personally asked the court to postpone the decision for four months, since the defendant is cooperating with the investigation and the research has not yet been completed.

The court approved the petition of the prosecution, as another hearing was scheduled for that time. The journalist Matthew Russell posted it on Twitter. 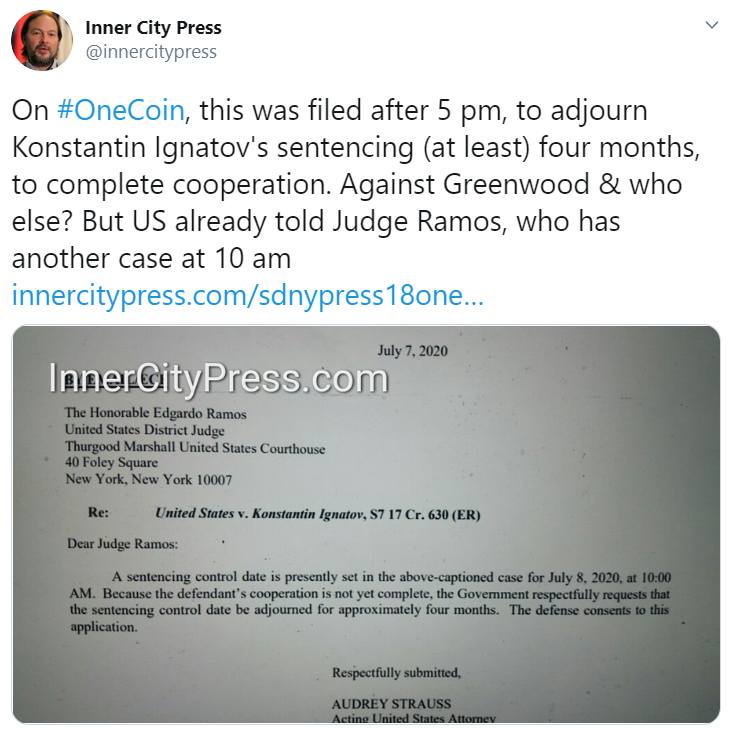 Recall, one of the founders of the OneCoin crypto pyramid, Mr. Ignatov, was taken into custody in the spring of 2019 in New York. After a while, he pleaded guilty to money laundering through cryptocurrencies. Still, he does not publicly confess his involvement in OneCoin, since he did not know that the project was a pyramid. Various sources say, the victims of the pyramid lost from 4 to 15 billion US dollars.

Important to note is that the main creator of the pyramid, Ruzhi Ignatova (the defendant`s sister), has still not been found. She disappeared back in 2017 and since then no one has seen her.